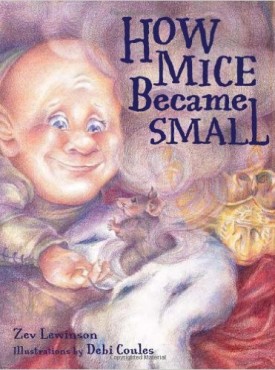 Summary: Cruel King James is magically transformed into a cute little mouse as he learns that true happiness comes from giving, not getting. Did you know that mice used to be 20-foot-tall, vicious carnivores? In this story, King James takes over the world in an attempt to satisfy his materialistic needs. He soon realizes that the more he has … the more he wants! Many children nowadays are bombarded with messages to buy this and have that. However, it is all a vain attempt to make them happy, and material goods will always leave them dissatisfied. As Henry David Thoreau said, That man is the richest whose pleasures are the cheapest. This timeless message is woven throughout How Mice Became Small. Kids need this understanding to be able to prosper through life happily, without becoming greedy over what someone else has. This book will show children that doing for others, making society a better place, and helping the world prosper with a non-materialistic outlook on life are the true acts that bring happiness … not hoarding away yet another bicycle in our treasure vaults.

Zev Lewinson (1953-Eternity) was born in Chicago, Ill., to Jewish immigrant parents, grew up (still trying!) in Newark and West Orange, NJ, and graduated from Johns Hopkins University. Very shy as a child (a condition eventually overcome by a combination of vodka and beautiful women), Lewinson became a voracious reader – the first ingredient toward becoming a great writer. His “been there/done that” life, has balanced many diverse pursuits and interests, among them, marriage, writing, teaching, and diamond dealing.

Lewinson’s eclectic writing skills have allowed him to produce a wide range of beautiful stories for children. Several of the stories are a result of situations he experienced with his own five children as they grew up. Accolades of intense admiration for Lewinson’s stories adorn the back cover’s of his books. Random House, Harper Collins, Skyhorse Publishing, and many other famous publishers, praise Lewinson’s work as “amusing and original … wonderfully creative … obviously very talented … tender and playful … possesses a knack for kid-appealing writing,” in an ongoing choir of adoration.

Children go wild over his stories when Lewinson does outlandish readings (funny voices and acting out character’s) at public libraries – a difficult task for the still shy sixty-two-year-old author. Every one of Lewisnon’s stories inspire children to proclaim, “It’s my favorite story!” A true believer in Malala Yousafzai’s words, “One child, one teacher, one book, and one pen can change the world,” Lewinson hopes that his stories will ignite children with a true lifelong passion for reading. To date, Lewinson has fourteen published stories, with twenty four manuscripts waiting impatiently for their turn to be illustrated.